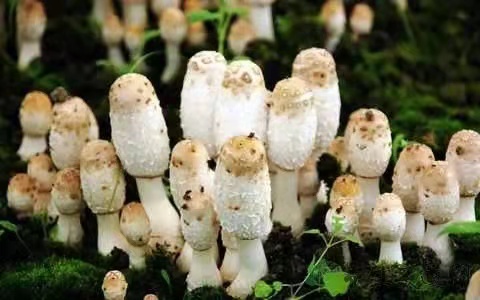 The fermentation cultivation of chicken leg mushroom is to mix the raw materials evenly, build a pile according to certain specifications, and enter the fermentation process. Then enter the fermentation process, generally turn 3 to 5 times, and turn the heap evenly. During the fermentation process, attention should be paid to punching, ventilation, heat preservation and moisturizing. Compost compost fermentation is a process in which organic matter undergoes complex biochemical changes under the action of various microorganisms under aerobic conditions. This process is affected by composting raw materials, composting site, composting method, composting progress, moisture content and participation of microorganisms, among which microorganisms play a particularly important role.
Stacking fermentation is aerobic fermentation. Generally, within a few hours after the stack is built, the total oxygen content in the stack is exhausted by microbial respiration. How to replenish the oxygen in the heap within a certain period of time, it mainly relies on the "smoke window" effect of the heap to meet the oxygen demand of microorganisms, that is, the hot air in the center of the heap rises and diffuses outward from the top of the heap, forcing fresh air Entering the stack from the periphery of the stack, resulting in the circulation of airflow in the stack, However, the circulation speed of this airflow should be appropriate. If the circulation is too fast, it means that the pile is too dry and loose, and the phenomenon of "white flowers" is prone to occur. If the circulation is too slow, the oxygen supply is insufficient, and anaerobic fermentation occurs. And pile fermentation, that is, the reproduction of microorganisms to a certain extent, only relying on the smoke window effect to supply oxygen is not enough. At this time, it is necessary to turn the heap to effectively and quickly meet the oxygen and nutrient requirements of these high-temperature bacteria groups to achieve the purpose of uniform fermentation.
Nutrient changes during compost fermentation and compost fermentation are complex processes of chemical transformations and physical changes. Among them, microbial activity plays an important role. In the medium, nutrient decomposition and nutrient accumulation are carried out simultaneously, and the metabolic activities of beneficial and harmful microorganisms consume raw materials. But more important is the activity of beneficial microorganisms, breaking down complex substances into simple substances that are easily absorbed by edible fungi, while bacteria synthesize polysaccharides and proteins that only the mycelium of edible fungi can easily decompose. For example, the main components of Agaricus bisporus cultivation materials are dung grass and chemical fertilizers, which cannot be directly decomposed and utilized by the mushroom mycelium. These organic substances with cellulose and lignin as the main components must be accumulated. In beneficial microorganisms such as Pseudomonas, Humicola, Streptomyces thermophilus, Thermomonas or Thermoactinomyces, especially under the action of thermophilic mesophilic and thermophilic cellulolytic bacteria, it is degraded and transformed into simple soluble substances that can be absorbed and utilized by mushroom mycelium.
Metabolites, bacterial proteins, polysaccharides and other substances left after the death of microorganisms such as actinomycetes can activate and promote the growth of mushrooms. After fermentation, excess free ammonia, hydrogen sulfide and other toxic substances are eliminated, the compost becomes a special flavor, the manure is loose and soft, and the physical and chemical properties such as air permeability, water absorption, and heat preservation are improved. In addition, the high temperature generated during the compost fermentation process kills the pests, reducing the threat and harm to mushroom growth from pests and diseases. It can be seen that compost fermentation is an important technical link in the cultivation of edible mushrooms, which is directly related to the success or failure of mushroom production. Therefore, in batch fermentation, the raw materials for dung grass fermentation should be selected, the carbon and nitrogen sources should be scientifically coordinated, and special attention should be paid to the balance of carbon and nitrogen ratios. Fermentation of the culture medium can neither be "raw" nor overripe.